Of the many iterations of Faust in literature, both modern and contemporary, Goethe’s Book One is probably the most referenced. It’s likely that Christopher Marlowe’s Doctor Faustus had little bearing on Goethe’s work having already written Faust before he read Marlowe in 1818. Goethe, romanticised elements of the narrative between good and evil, bestowing his protagonist’s inevitable downfall on Gretchen, the object of his desires. Marlowe spared no soul.

It’s as familiar a myth to German schoolchildren as King Arthur is to British children, for Americans, their Gothic anti-hero being Irving Washington’s Tom Walker (The Devil and Tom Walker). These are childish comparisons but it’s essential to remind ourselves the perceived disconnect between Faust One and Faust Two.

Goethe laboured for thirty odd years to complete his magnum opus, and it shows, blocks of history fall off the page as years (and pages) pass by. In its entirety, it is a vast philosophical construct. Written during tumultuous times, the French Revolution of 1789 and the July Revolution of 1831, it was interceded by a fallow period between publication of Faust One in 1808 and Faust 2 in 1832, the year of Goethe’s death. Major inspiration during this period would have emanated from the Lord Byron whose death during the Greek war of independence led Goethe to dedicating Euphorion, the son of Faust and Helen of Troy, to the English poet. 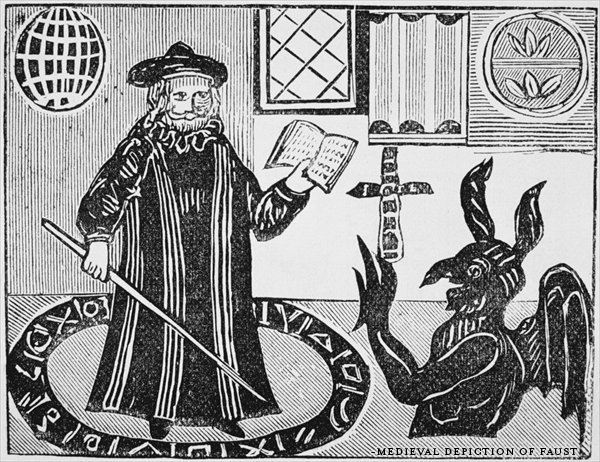 There are many reasons for the paucity in adaptation but the most obvious is simply nobody had the time or wherewithal to wade through the maelstrom of socio-economic upheavals and if they did, would anybody want to sit through it? Unlikely.

Faust 2 is a metaphysical rollercoaster ride. Goethe was a very Germanic author with his literary root firmly planted in the classical: He believed Romanticism to be weak. He is quoted to have said: “The classical I call the healthy, and the romantic the sick’’.

Faust searches for Helena, who upon her death, takes away his lust. Wiser now, he now recognises the futility in trying to emulate God’s creation. Unconcerned or distracted by carnal desire his focus changes to empire building. Encroaching industrialisation, warfare and the decaying influence of the Catholic church conspire to contaminate Faust’s already dark horizon.

Ultimately, his soul is saved, as God, the ultimate author of his misfortune, cannot lose a bet.

The Last Faust weaves a single coherent thread through both books, cutting out elements that jarred with the contemporary storyline. The #metoo movement is front and centre of the first act, Dr Goodfellow’s tech firm Winestone Inc. a pretty clear marker for the sexual indiscretions and violence to come. The film’s carousel of locations and timescapes takes the audience on a dizzying ride through the centuries in a series of dreamlike dioramas. Humm’s unorthodox approach eschews traditional cinema tropes in favour of infusing his art work with life, albeit artificial and destructive.

By marrying together both books the film will no doubt invite criticism, especially for the wholesale removal of key scenes and characters. If you designed an algorithm to rewrite Goethe’s Faust 1 & 2, with all parameters intact, it’s a fair assumption you’d be left with something very similar to The Last Faust and maybe that’s where the magic of this production resides.