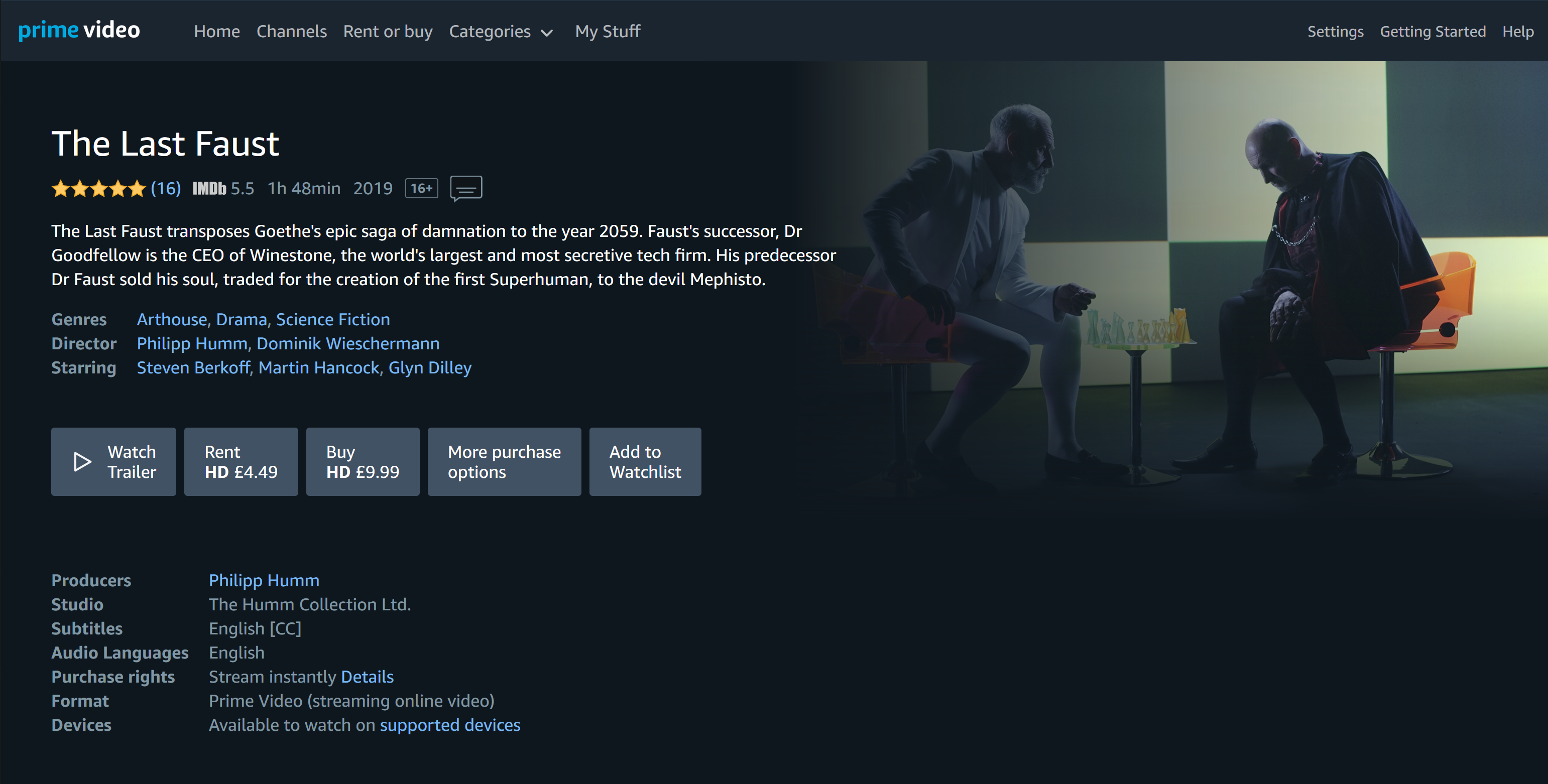 The Last Faust has had excellent critic and viewer reviews on Amazon, iTunes and other platforms following its release on December 2nd 2019.

The Last Faust is a feature art film starring Steven Berkoff. It is, at its core an avant-garde theatrical interpretation of Goethe’s Faust 1 and 2. The music is based on Richard Wagner with guest tracks by Swiss electronic band Yello.

If you haven’t already seen it, we hope you enjoy watching The Last Faust over the Holidays and I look forward to getting your feedback. The film is available on Amazon, iTunes, Microsoft, Sky, Google Play and Wuaki.TV.

“Some endeavours are so outlandish, so crazily grandiose, that you can only applaud their ambition. Such is Philipp Humm’s film version of parts one and two of Goethe’s epic verse drama Faust. ”
Suzy Fay (Financial Times) Nov 19

“So, if Art house and Faust are your thing, or you’re a fan of Steven Berkoff, THE LAST FAUST, is for you…with such strong performances, this is a piece worth a look for that alone. ”
Jane Foster (britflicks) Nov 19

“In essence, this is Humm’s homage to Goethe and Nietzsche. I didn’t love it, I didn’t hate it, but it made a refreshing change from the simplistic narratives and reductionist ideas about life found in many modern films. It asked me to engage my brain. And it had Stephen Berkoff in it, which was nice. ”
Helen Nicole (Joyzine) Nov 19

“There’s absolutely no denying that “The Last Faust” was made with immense passion, dedication, and craftsmanship. The result will not be loved by everyone but it’s still a very peculiar, unique, beautiful and expressive movie.
Liselotte Vanophem (OC movie reviews) Dec 19

“It’s a fascinating interpretation, and one that no doubt will be foist upon students of literature and theatre for years to come, confusing as much as enlightening them.”
Wendy Attwell (Set The Tape) Nov 19

“The film then, as a story told to us by a storyteller more than as an action film, is interesting, brings up questions that are worth discussing, and should engineer a real debate on societal questions. ”
Jacques Courlardeau (Academia) Nov 19

“Humm and codirector-cinematographer Wieschermann create a staggering variety of vivid tableaux to depict this story, and the film arrives accompanied with paintings, photography, sculptures and a novella. In other words, this feels more like a museum piece than a movie, designed to tease and confront the viewer rather than to recount a coherent story with empathetic characters. Yes, it’s very difficult, but Humm’s purely bonkers approach is dazzling.”
Rich Kline (Shadows on the Wall) Nov 19

“The screenwriter and director here, Philipp Humm, was one who put his stamp on it in the style of video artists, a strain of modern art that adopted the latest technology to craft its imagery and put across its themes. ”
Graeme Clark (the spinning image) Nov 19

“Viewing The Last Faust as a moving art work – probably helps. It’s a strange combination of the theatrical and the artistic, and while it certainly brings Faustian themes of hedonism into the modern day”
Marie O Sulivan (the movie isle) Dec 19

“The feature is narrated by Steven Berkoff, who Humm says has the “depth of Kafka and the cinematic presence appropriate for Hollywood”.
Stuart Clark (Variety) Nov 18

Article
“Berkoff sees Goethe’s play as a marvellous antidote to British theatre, which he thinks is in a death spiral ”
Stuart Jeffries (Guardian) Nov 18