Philipp Humm featured in The Times.

Philipp Humm was a titan of business in his role in charge of operations for Vodafone in Europe. Rudolf Humm was a struggling artist hoping that the world would wake up to his talent.

Now, meet Philipp Rudolf Humm, the former telecoms executive on the verge of making a mark in the art world.

As he prepares for his first solo exhibition, Mr Humm, 57, has lifted the lid on his double life and the decision to give up a gilded corporate existence for the sake of his passion.

“When I started with my art, I kept my two identities separate,” he said. “I felt that the artist would be overshadowed by the businessman. And on the other hand, the businessman did not understand the artist.” Or, as he says, on his website: “There is more than one Humm in me and my art frees some of them”.

As a teenager Philipp Humm, born to German and Belgian parents, failed to get into art school, embarking on a successful business career instead. He ran T-Mobile’s operations in America and Deutsche Telekom’s in Europe before being poached by Vodafone in 2012 to do the same job from London. It was here that he took up his brush again. “I fully immersed myself into art,” he said. “It was being in London itself plus a separation that led into a divorce [from the mother of his three adult children] which is always a time when you think more fundamentally.” 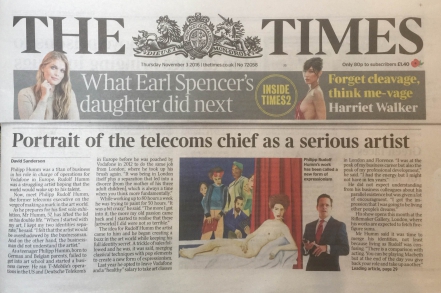